The famous Japanese video game company, Sega Corporation, was one of the giant arcade game console producers back in 1983. Led by Hayao Nakayama, the company gave us the joy of gaming with digital video game console systems. Only veteran gamers know about the thrilling gaming experience that comes with the Sega Master System, and miss those memorable days.

As a new generation gamer, it would be an incredible journey to learn about the history of Sega, the most prominent video game console to shape the modern gaming industry. With that in mind, let’s recall everything we know about Sega video game consoles.

It all started in 1976 when the Japanese company Tatsumi started producing pinball machines. They manufactured a few of these machines with great success. In 1981, the company was renamed Sega Enterprises.

The first video game console produced by Sega was the SG 1000. Released in Japan on October 15, 1983, the console had a 16 kHz sound and offered two slots for cartridges.

Did you know the price of a Sega Master System console?

The price of a Master System console in 1985 was around $100 USD (equivalent to about $490 USD today). The system came with one cartridge slot and two joysticks for gameplay.

How Many Ports Did Sega Make for its Game Consoles?

Sega’s first game consoles did not have any ports or connectors, but it changed its policy in 1984 with the release of the SG-1000 Mark III.

The Mark III had three ports: an AC-DC power connector, a reset/select port, and an RF modulator port. The modular could connect the console to a satellite dish or an antenna to receive satellite signals from Europe or North America (called “Satellaview” by Sega).

The later versions of the Sega console followed the previous model as the standard for a video game system and arranged ports accordingly.

Now, let’s take a look at the Sega video game consoles upgrades by the time;

The Sega SG-1000 was one of Sega’s first video game consoles. The console was released in Japan on October 15, 1983, and included a 16-bit CPU, two slots for cartridges, and a cartridge slot for the second joystick.

The console offered more than 50 video games, including “Space Invaders” and “Galaga”, both developed by Saga themselves. Unfortunately, Sega SG-1000 got wiped out the same day when Nintendo Famicom entered the market.

Released in Japan on August 14, 1986, the Sega Master System was one of the most popular video game consoles ever made. The system had an improved 16-bit CPU with colour graphics and two slots for cartridges.

As the second generation of video game consoles, the Mega Drive had a faster processor than its predecessor, allowing it to display more colours. It also supported up to five players simultaneously without lag.

It also included an AC adapter that could be used to play games without a TV set or satellite dish. It used a cartridge slot instead of a composite cable or Satellaview signal. It also included a built-in light gun, which was compatible with most of Sega’s games.

Unfortunately, Sega Genesis had to face its competitor Nintendo in a losing console war that suppressed Sega’s popularity for a long time. Though the company only managed to sell 500,000 consoles in the US, they finally beat Super Nintendo Entertainment with a low-cost Sonic the Hedgehog video game.

The Sega Game Gear is a portable game console that was released in 1990. It has a built-in LCD screen, a two-channel audio system, and four buttons. The Game Gear supported up to four players at the same time.

The Sega TeraDrive was a third-generation video game console released in Japan on November 14, 1991, and in North America on August 23, 1992. The console could play games from the Mega Drive and the Master System without a port-forwarding adapter.

The system also featured a memory pack expansion slot that could be used to extend the amount of RAM, expand the number of games that could be played on one cartridge, or add additional sound channels for three-dimensional effects.

The Sega Saturn was one of the first video game consoles to use 3D graphics and offered support for analogue controllers such as the light gun. It had a faster processor and an improved display resolution to produce more colours simultaneously.

It also included several ports to connect to other devices like modem, TV, telephone cable, or ethernet. The console beat Nintendo 64 in both power and performance but failed to continue due to bad commercial marketing.

Beating both Playstation and Nintendo 64, Sega made it into the top fan page and stayed there for two years before Sony, Nintendo, & Microsoft landed the sucker punch.

The glory of Sega ended with the Dreamcast series, and the console went to the museum.

What Happened To SEGA?

After returning from the console market, Sega now develops video games as a third-party game developer. Sega made a way to bring nostalgic video games into modern PCs through Genesis Emulator.

You can still play those retro games from Sega at home.

But if you are looking for the original consoles, stop by Mega Media Xchange to get them at low prices! 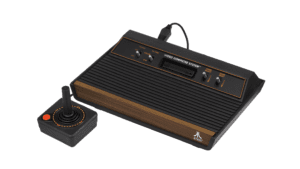 The Complete History of Atari